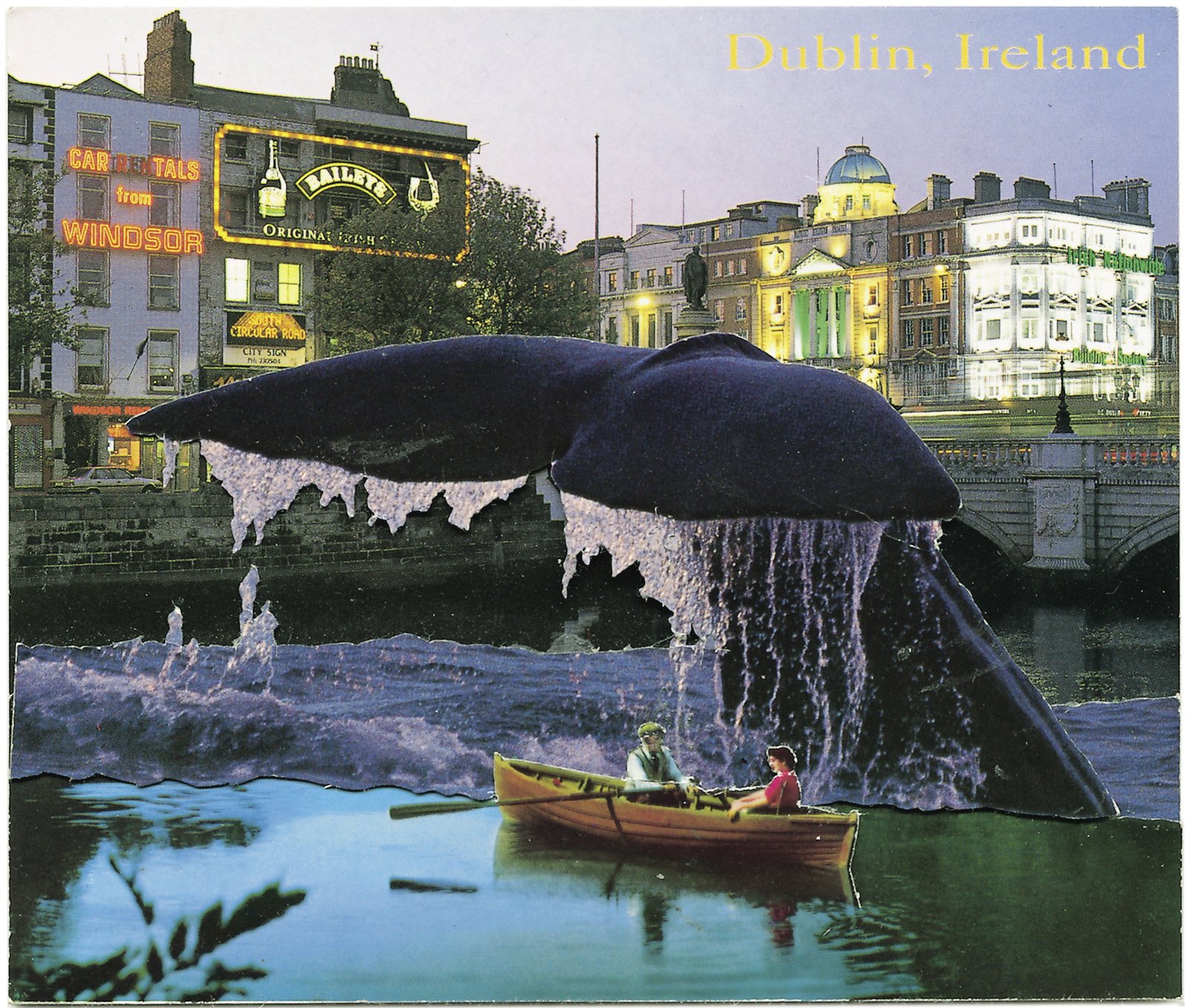 The IRELANTIS collages were begun a year or two after I returned to Ireland after 13 or 14 years in London. One of the many sets of roots was one day back in my council-flat kitchen at the Elephant & Castle, I had heard on the radio a song that had the line; “..if only Sydney Harbour opened onto Galway Bay…” and was gripped by the image. (It’s called ‘If We Only Had Old Ireland Over Here”). Back in Ireland I had consciously made what would be the last of my ‘Troubles’- themed collages and wanted to find some new direction. The previous work had started to become more extravagant and looser; I wanted as I said once “to make work more full of love and less of anxiety”. One idea was a series called ‘Ancient Monuments in Ireland’ with an ongoing joke of moving monuments from Elsewhere TO Ireland.. and one day in wine-fuelled jest with my then partner, Miriam, we hit on the word IRELANTIS and I immediately knew I had a direction. IRELANTIS is a place where the imagination and reality intermingle with a dreamlogic of its own, driven of course by what you can get away with in a collage. It’s amazing what the mind will accomodate or attempt to believe. Of course there’s a sort of loose formula; in that nearly everything is based on the already-psychedelic postcards of the John Hinde company, but, as I said the idea was to “take the bad joke of reality and push it off the edge”, which I feel is actually in an Irish serious-absurdist artistic tradition, exampled by people from Jonathan Swift to Flann O’Brien to Spike Milligan to Kevin McAleer. In fact there’s a terrific quote from George Bernard Shaw: “The joke is: I’m serious!” Not unlike my ‘Troubles’ works, at the time and since many people have interpreted them as satire, but I like to think that’s just one layer of the meaning and they are as visionary as they are satirical.
They have become in a small way part of Irish cultural history since then, featuring on dozens of book covers for instance, which I feel is a wonderful and important possible extended life for a work of art and I love to see them reproduced.
The earliest were made in 1994-5, and then in bursts around ‘96,97 and a new group, with an interestingly different tone, for an invited exhibition in 2005. I still enjoy making them; or to put it better, still make them occasionally when I enjoy it, for I think my excitement and enjoyment making them is very much part of them.
Seamus Heaney memorably described them as ‘full of allusion’ and I like to think they have, as he said “a lot going on, under the surface..”

My ‘technique’ in collage has pretty much always been to start with a loose but engaging series title, gather lots of material and often (tediously but meditatively) make preliminary cuts because I sort of know what parts I want; and then I play with the fragments to see what suggests itself. This spontaneity is really the only way I can work effectively but it means the work will have an energy and life of its own if it succeeds. Sometimes a collage can be as simple as two pieces as in “The Queen of Heaven Appears at Newgrange” or can grow to six or seven layers; but there’s only so much you can do and I never want to repeat myself. Duchamp said, I’ve read, that he “made work to amuse himself” and, apart from wanting to take over / fix the world, I think I do too. BTW I recently made a few new ones in a new subseries called NORTHERN IRELANTIS.