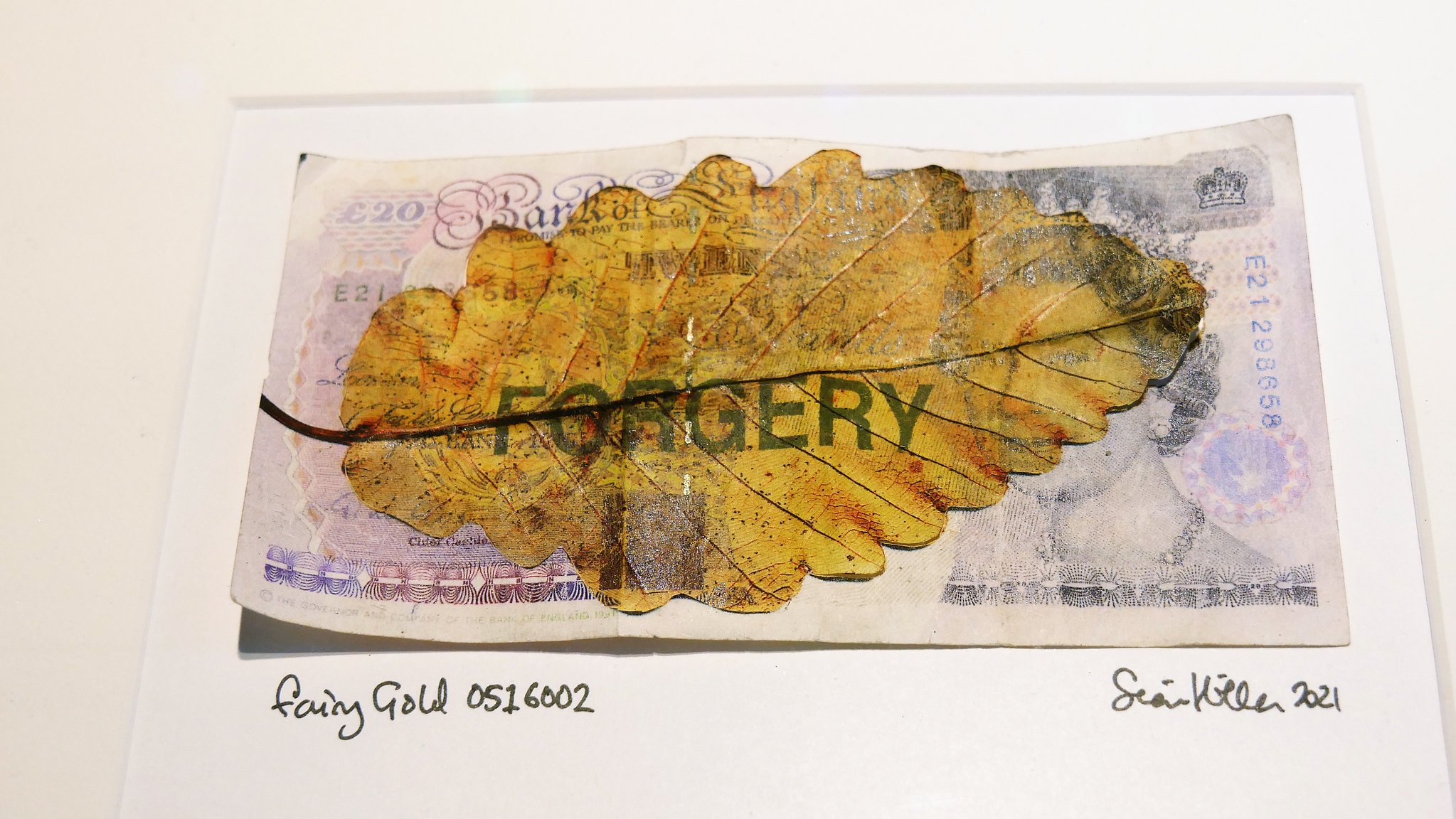 Recent (2021) mixed-media works. Invited to make new work for an exhibition on a loose theme of ‘copyright’; I was stricken with a new idea to use some amazing materials I’d been hoarding.
1. Some years ago I met a nice man who worked for a Building Society (a kind of high-street bank). Aware of my collage work, he explained that every six months or so all any counterfeit notes identified in their branches were gathered to his office and destroyed, and he wondered “if I could make something with them”!
Since I’ve been a child I’ve been fascinated by the phenomenon of money; how some pieces of paper with the correct markings have so much power. I was gripped by the idea of using the counterfeit notes and immediately agreed, receiving a number of them, all now stamped “COUNTERFEIT” or “FORGERY” in large letters in vivid ink; also with some or maybe all the agreed fee being paid in advance. However, having been paid my motivation to finish was significantly lowered and the ideas I had seemed weaker, in fact far too weak for the material; actual counterfeit banknotes. I couldn’t help feeling they each had a huge amount of emotional energy attached apart from being fascinating things. So a year passed, and I explained the situation but that I hoped to develop a good enough idea. Then another year passed. Then maybe another few.
Meanwhile the Building Society went bust and ceased to exist.  So the counterfeit notes stayed in a box in the studio and every now and then I would look at them and ponder.
2. As a young child I hardly ever went to the cinema; I’m really quite autistic and have problems sometimes following plots (can’t stay interested, or too distracted by the visuals) and I think I used to fall asleep regularly when taken to one.
However I have vivid & hazy possibly imagined memories I think of being brought to ‘The Jungle Book’, and maybe of falling asleep during it, and I have fragmentary memories which may or not be from it, that the hero child goes and hangs out in the animals’ World and that on leaving they give him a gift of lots of Human money they’ve acquired and don’t want and he brings it home and happily stuffs these wads of cash under his pillow.
But… in the morning when he wakes he finds they’ve turned to – always been?- dried leaves.
It’s actually of course a trope in Fairy Tales of various kinds; the hero travels to another world and brings back treasure; but of course you can’t and it turns to something worthless in the mundane world.
So I was gripped by the image of the money turning into dry leaves and realised I wanted to use the counterfeit notes and real leaves and the beautiful archival printers that I use to freeze the moment when the banknote turns to leaves or vice versa.
I like it and hope that it’s actually very hard to see which is exactly counterfeit (or real?) banknotes, which is leaves and which is neither. I’ve made about 8 of them and hope to make more.