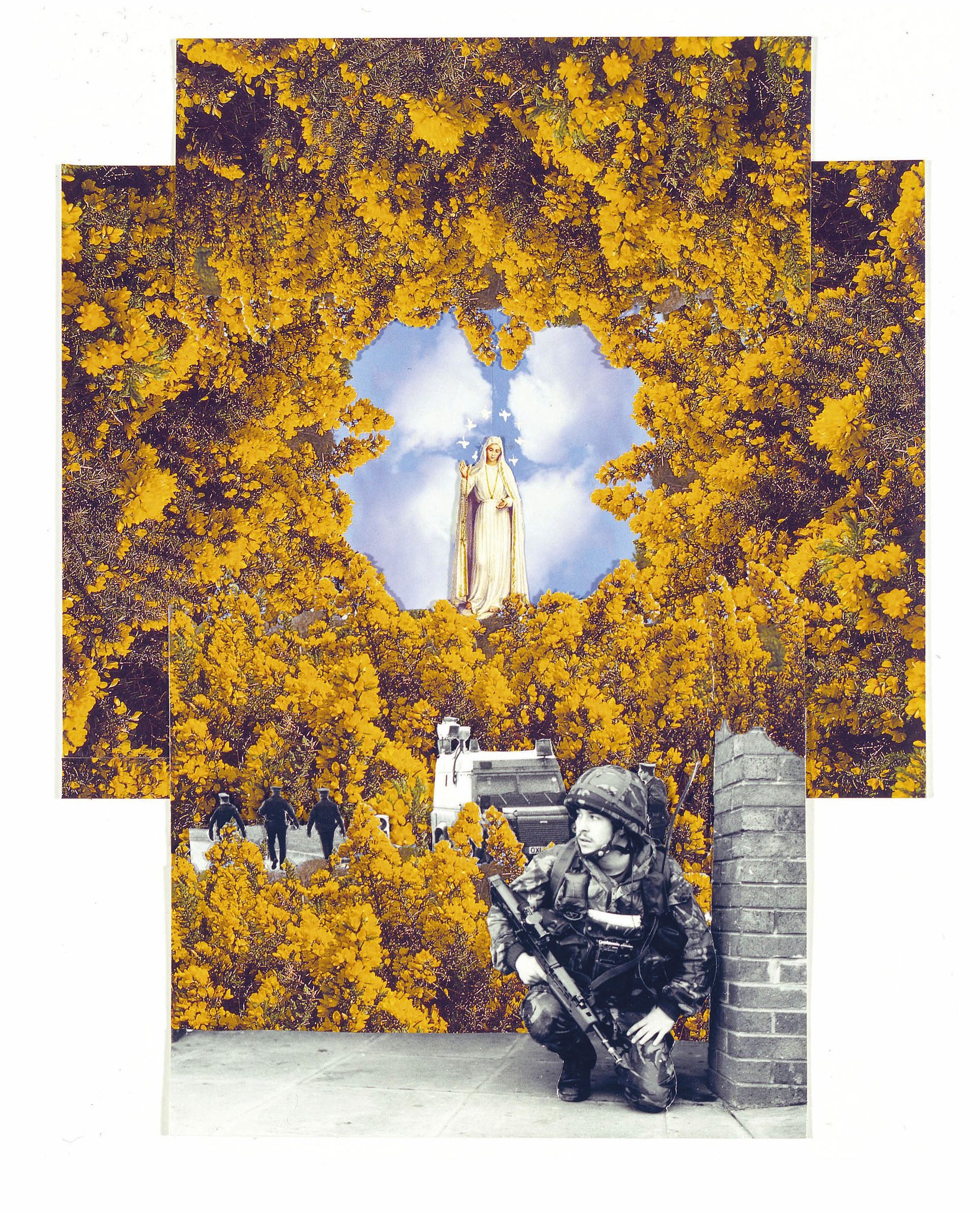 As a teenager I was already a fairly competent photographer, and without thinking too much about it began photographing the strange and incongruous place around me that Northern Ireland of the 1980’s was. But the best photographers in the world had been photographing it for decades and it was hard to see what I could add. Then getting the photos seen would be very challenging and then there was the limit of what you can say though straight photography, and my desire to make more emotionally and intellectually engaging and more complex works. At media/art school I started experimenting with my prints and, inspired by DADA and the anti-Nazi John Heartfield, as well as then-visible British collagists like Peter Kennard and Kath Tate I quickly discovered I enjoyed a style of paper photocollage using my own photos as base material and mixing in worlds from toy packaging, comic books, and religious material.

They were usually titled in series and driven by the sometimes punning titles, like Londonewry; firstly a play on the name of Londonderry/Derry/Doire as well as a sort of contradiction. In one case, I discovered to my astonishment that I had been born within an hour of the first man in space, Yuri Gagarin, landing back on Earth. I realised I could be the ‘Newry Gagarin’ and made a long series of works with that title; bringing oneself back to Earth as a spaceman was such a gift to collage!
In the eighties too I discovered the writings of Robert Anton Wilson and his notion of ‘Reality Tunnels’ (that he got partly from Alfred Korzybski–) the idea that we are all, by human nature, severely limited in our comprehension and apprehension of the world by the web of language and ideas we have acquired and accreted and which forms our ‘reality tunnel’ – and that our job, to become more human, may be to look outside of the cave and beyond the ‘flickering shadows’.
I became more tolerant of my own ‘mystical’ inclinations (I had been studying advanced maths and physics at school before I got derailed by Art) because of RAW, and also more intellectually curious about ‘conspiracy’ ideas, and though I might have intuited it I didn’t realise then how much the NI conflict was a ‘dirty war’ and a psychological one. I look at my ‘Professionals’ series differently now, having learned that the real ‘secret services’ literally had a hand in writing the plots of the children’s TV series.

I had grown up watching British children’s TV like Blue Peter, where at Christmas sometimes the Band of The Royal Marines or another military band would parade around the studio in what really must have been a propaganda/recruiting too. But the thing about watching that in Newry would be that you could look out the window and see the same guys in full camouflage in your back garden, and they occasionally shot and killed children and teenagers like myself. And by the way the Television would then lie about it. I realised that there seemed to be an ‘Us’ and a ‘Them’, and I might be the ‘Them’.
Over the years I pondered and worked around this confluence of identity, meaning and power.

Like a lot of my work the montages are autobiographical to an extent, certainly full of personal as well as other references and ideas. But like most of my collage works their strength is that they’re not preconceived at all; I’m really not consciously thinking and they mostly make themselves, if they work, as I make them- I don’t know what is going to happen until I make it.
I read an interview with myself from the period where I described finding myself ‘laughing out loud, on my own, in the middle of the night, working on them” and that is true. I also wrongly sometimes said I wanted them to be ‘funny’ but was once correctly corrected by Fintan O’Toole; he wrote “they’re witty but they’re not funny”.
But the humour in them was very important.
As a young srt student I’d had a lecture (visiting lecturers are one of the best things about art school) from a performance artist called John Carson; from him I learned that good serious art could be funny and good funny art could be serious.
These collages were made mostly when I lived in London and were conceived for a British audience primarily; I once in interview described them as ‘armour piercing art’; meaning emotional armour of course. I wanted them, like everything I make above all to be beautiful and I hoped they would be strong and interesting and complex enough to have a long life.